macayle — “I am a collector and concocter of myths and legends, as well as some very real truths (though it may often be difficult to tell which is which). I have written many things on many topics. Some were not very good, and therefore not very important. What is important is my ever-increasing stack of yet-to-be-written adventures. Fresh off that stack are books one and two of an exciting four-book fantasy/adventure series. If you loved the Chronicles of Narnia, the Spiderwick Chronicles, Harry Potter, or Lemony Snicket, you will love the Knightswood Tales! Their rich imagery and imagination makes them the sort of stories to be enjoyed by everyone, children and adults alike.”

macayle has lived in Arkansas, New Mexico, original Mexico, and Michigan. He currently resides in Texas.

Book One: Here and Back Again tells the story of Mac, a boy who never really belonged anywhere—until he arrives at the Manic Street Orphanage (which is in London, England, circa 1950). There, he meets new friends, a strange professor who seems to know something about everything, and a peculiar little animal that leads the way to the greatest adventure of Mac’s life. Whether traveling through a wardrobe to a magical fantasy world, or traveling on the ear of a big friendly giant to a land of even-bigger (and not-so-friendly) giants, the world of the fantastic and strange is closer than you think. Mac doesn’t find any fantasy wardrobes or giants at the Manic Street Orphanage, but he does find a door to a strange place, and he might just have found a home, too—that is, if he can ever get back there.

“Mac and fellow orphans at Manic Street Orphanage follow a squirrel through a magic mirror in this fantasy novel. The orphanage, on the site of an ancient abbey — complete with graveyard — is an effective setting. —Booklife 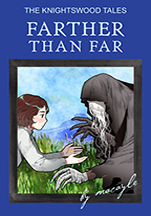 Book Two: Farther Than Far continues the story of 11-year-old Mac and his friends from the Manic Street Orphanage. Or rather, it begins Mac’s journey somewhere else entirely. The doorways to adventure are often closer than we think, but the way back from that adventure is generally not as easy to find. Finding himself in a place he doesn’t recognize – a place it seems time has forgotten – Mac wonders if his favorite stories of ancient hereos are being proven true before his eyes. He also wonders if his friends from the orphanage will be able to figure out what has happened to him. But most of all, he wonders if he’ll ever return there. He’ll encounter sinister characters, a thrilling battle, a mysterious ring or two, a magic mirror or two, and many new friends along the way. And he might even become a hero himself, if he can figure out how…

Book 2 of the Knightswood Tales continues the story of Mac on his next adventurous journey through the mirror. In Farther than Far, Macayle engages tweens, teens, and adults alike with his masterfully entertaining writing style. You’re immediately drawn to the intrepid Mac and the no-nonsense Nandi as they venture into an alternative and mysterious world. In the ever growing fantasy genre, Farther than Far is destined to become a favorite for generations to come. —Edsel B. Clark, Ed.D.

Allusions to myths and legends pepper the pages of this second installment in The Knightswood Tales series, which follows the adventures of Mac and his fellow orphans, who have traveled through a magic mirror to far off lands 1,500 years in the past. —Booklife